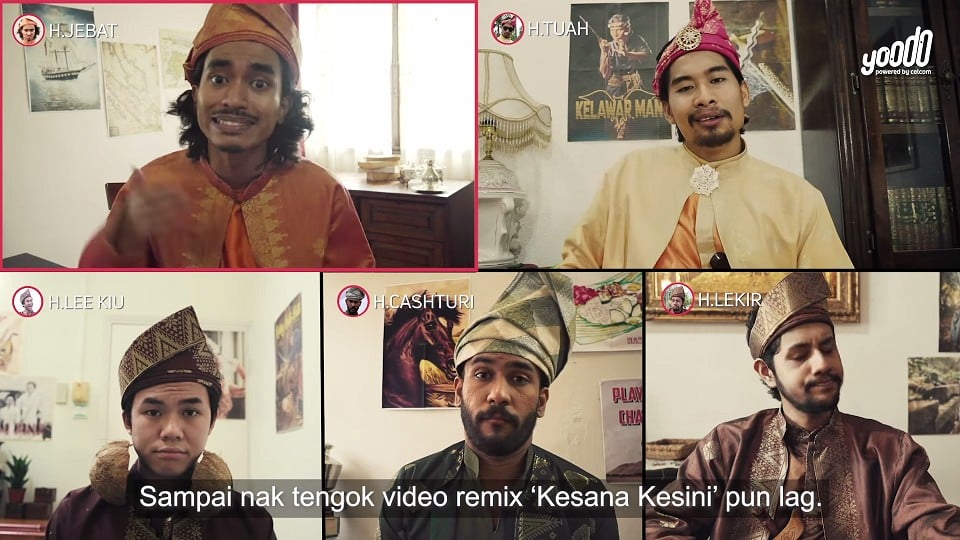 Yoodo, Malaysia’s first truly customisable and 100% digital mobile service has lived up to its bold and cheeky personality with their new Hari Raya advertisement.

“When we were coming up with the idea for our 2020 Hari Raya ad, we knew we wanted something that matched our brand philosophy and reflected the reality of this year’s Raya”, said Chow Tuck Mun, Head of Yoodo. “The ad is also symbolic of our own efforts at Yoodo, to keep Malaysians connected and entertained during these trying times.”

“This year’s Raya may be quite different but there is nothing that prevents the human spirit from connecting and sharing in the joy of this meaningful occasion, even if it means relying on technology to bridge the physical distance,” added Tuck Mun.

While the five warriors catch up over the video call, things take a sour turn due to a misunderstanding and jealousy between Hang Jebat and the rest of his “gang”. Ultimately the spirit of Hari Raya shines through with compromise and forgiveness saving the day and resolving the misunderstanding.

The ad brings the laughs whilst honouring the beloved Malaysian heritage, all underlined with a message of togetherness and positivity in the face of our current adversity.

While the ad’s video-conference presentation style lends a truly unique look and feel to separate it from the barrage of Raya advertisements this year, this wasn’t always the plan.

“When the MCO was announced, we knew we had to pivot and make the shoot work with the limitations we have. Instead of focusing on the obstacles, the team focused on what we can do within our reach.” Jan Lee, Lead Strategist at 4 Thirteen, the creative agency for Yoodo.

4 Thirteen had the initial version of the script set in a ‘kampung’ house. The team had to change course swiftly when the pandemic broke out and the MCO was announced, scuppering any plans of having normal production for the advertisement.

Hence the entire script and premise was rejigged to have all the characters interacting over a video conference call before ‘Raya’.

On shoot day, each talent was sent a simple camera set up, which then was broadcast to the director and agency who remotely directed the shoot. After shooting each talent separately, the entire video was seamlessly edited to resemble a video call, despite the cast not having any actual interaction or visual cues between each other during the shoot.

In an effort to aid users and connect families during the on-going outbreak, Yoodo is providing free data to users daily.  To further celebrate Raya, Yoodo is also giving away up to RM50,000 worth of ‘Duit Raya’ to lucky users.

Visit here for more Yoodo and its Raya promotions.