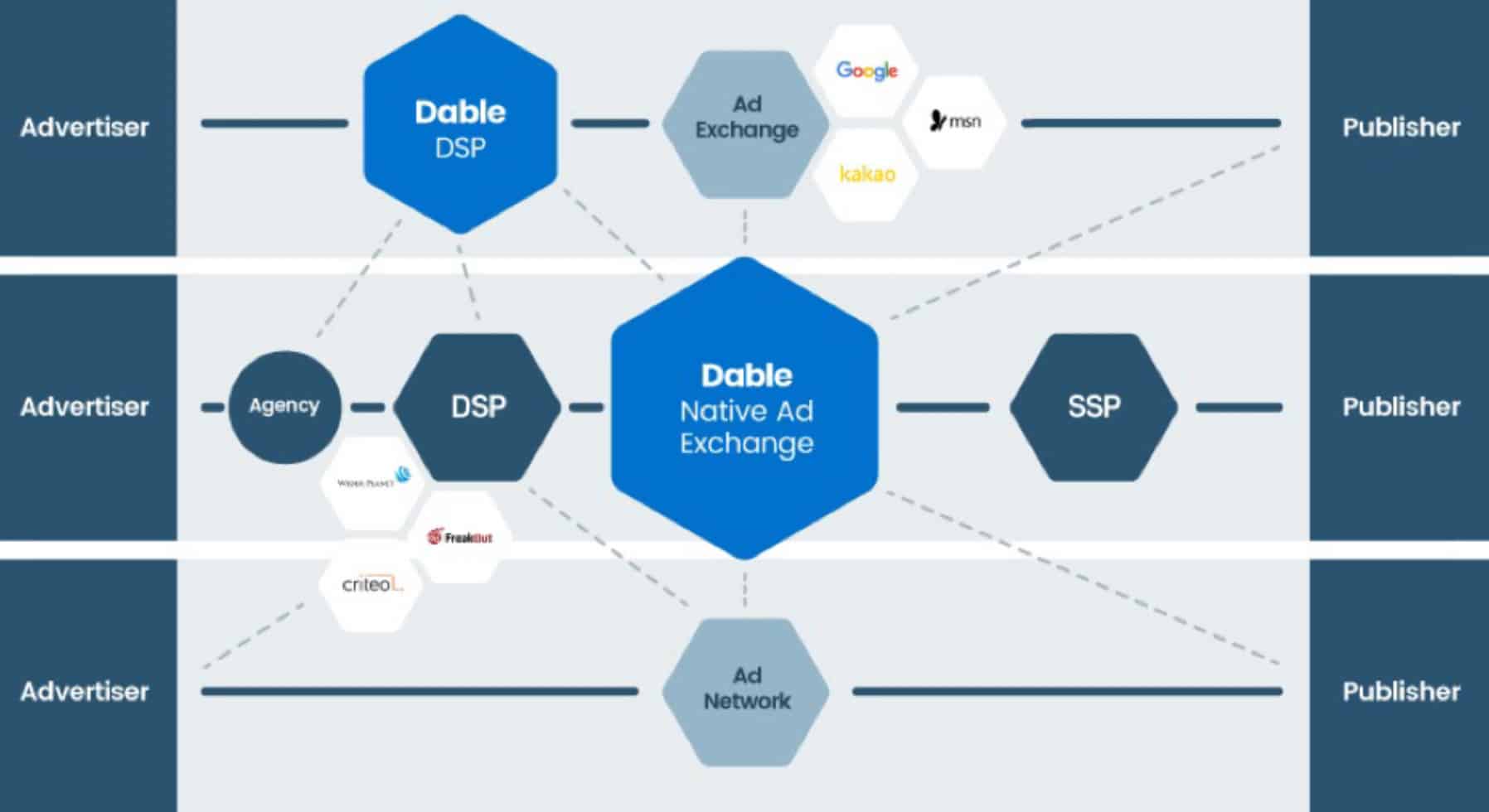 Ad Exchange is an essential system for programmatic buying.

Dable, the leading programmatic native ad platform, has launched a Native Ad Exchange that is based on Real-Time Bidding(RTB). Dable, headquartered in South Korea, announced that it has released its own DSP that conforms to IAB’s(Interactive Advertising Bureau) OpenRTB protocol and provides Dable Native Ad through the newly launched bid-driven native ad exchange, a programmatic advertising marketplace. Dable exposes advertisements that users might be interested in by analyzing their reading behavior and consumed content in real-time. The appeared ads are tailored to blend in with the website’s design.

Ad Exchange is an essential system for programmatic buying. When the Ad Exchange secures an individual ad impression, it requests multiple advertisement platforms for ads. These platforms then participate in an auction to obtain the ad impression. Consequently, the highest bidding advertiser wins and their ad is served. This method improves advertising performance by effectively distributing the advertising impression.

Based on RTB, Dable Native Ad Exchange mediates transactions between various advertising entities such as Ad Networks, DSPs, and SSPs. Through Dable Native Ad Exchange advertisers can execute advertisements effectively by purchasing only the desired ad units from a wide range of inventories. In addition, advertisers can not only target time, place, gender, device, and interests by utilizing various algorithms, but also transact advertising costs towards the campaign’s objectives, for either a better CTR, high conversion, or increased engagement.

The Dable Native Ad Exchange, in particular, is the largest in Asia for native ad demand. It has partnered with over 2,500 premium media in Asia including Korea, Taiwan, Japan, Indonesia, Vietnam, and Malaysia, securing 28 billion monthly impressions by itself. It is also linked to both domestic and overseas ad exchanges such as Google Ad Exchange, MSN Ad Exchange, and Kakao Ad Exchange. Through Dable’s native ad exchange platform, it has become possible to bid on billions of linked ad inventories and expose ads on Google, MSN, and Kakao. The native ad exchange has processed 22 billion ad requests as of August 2020.

Besides Dable’s DSP, Dable Native Ad Exchange allows other DSPs to participate in the auction such as Wider Planet, FreakOut, and Criteo. Any media partnered with Dable can receive high quality advertisements through the native ad exchange. Moreover, it helps media with monetization by selling ad inventory at high prices through DSP competition and programmatic buying.

Dable’s CEO Chaehyun Lee said, “Through the launch of Dable’s DSP and RTB based native ad exchange, Dable has proved its excellence in software technology and big data processing once again. Furthermore, the DSPs will now compete fairly in the bidding process through this digital marketplace. This reflects our effort to provide a more reasonable service and confidence in Dable’s technology.” “Dable Native Ad Exchange will be an effective channel for media with services in Asia and advertisers targeting Asia. Dable will strive to become a leader in the online advertising market in Asia.”

Sign Up For Our Newsletter
In this article:digital advertising, news, south korea
Up Next: