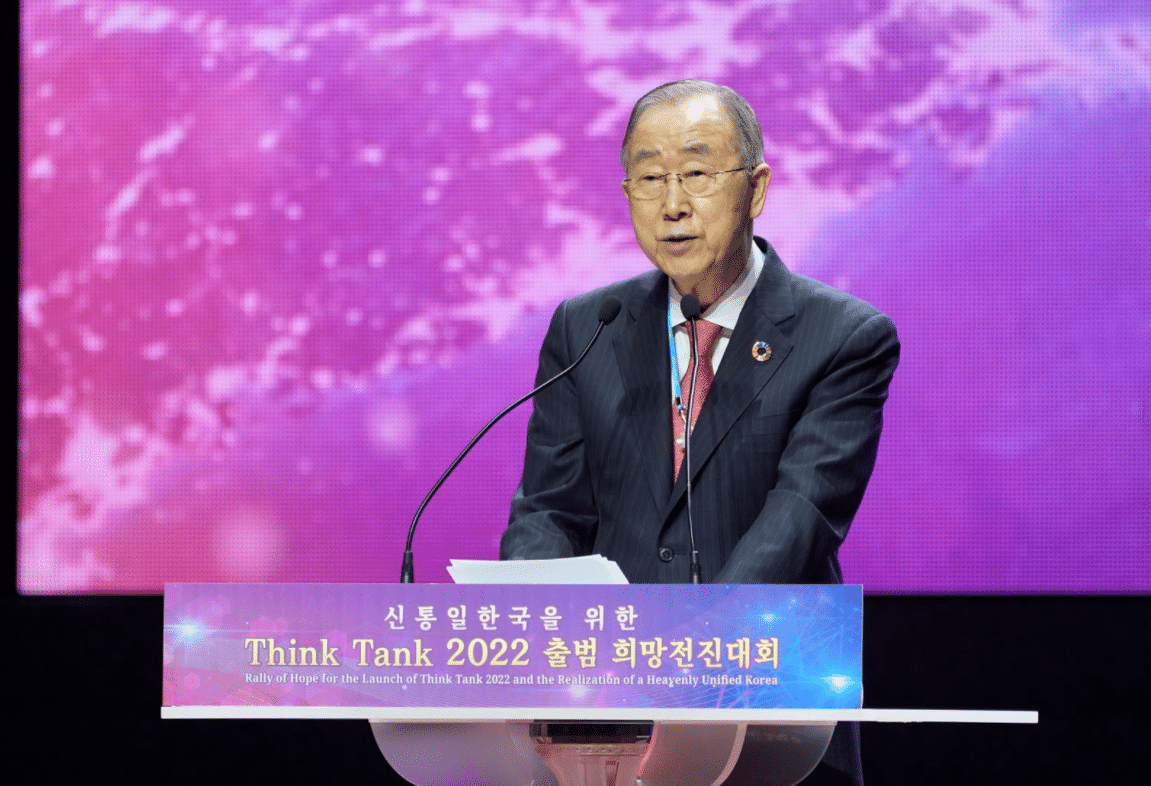 World leaders and experts joined more than a million global participants for the launch of “Think Tank 2022” on May 9 KST during the virtual 6th Rally of Hope for the peaceful reunification of the Korean Peninsula.

The rally, sponsored by the Universal Peace Federation (UPF), was streamed live from South Korea to 194 nations and translated into 14 languages. Think Tank 2022 is a global multi-sector network of more than 2,000 experts from a wide range of fields—government, business, academia, faith, media, arts and culture—dedicated to the collaborative search for solutions to the world’s most critical challenges.

World-class leaders including the rally’s 12 keynote speakers affirmed and enhanced the concept of Think Tank 2022. “This network will make a difference for peace on the Korean Peninsula through international unity,” said Ban Ki-Moon, former United Nations Secretary-General and chairman of the new initiative. “I applaud Dr. Hak Ja Han Moon, UPF, and the leaders of Think Tank 2022.”

“As leaders from around the world who cherish the values of faith, family, democracy and justice under law,” said former U.S. Vice President Mike Pence, “I commend you for coming together at this event to continue to sow the seeds of peace, believing that in time we will reap a harvest of peace that will benefit the people of Korea, the United States and all mankind.”

“A reunified, denuclearized Korean Peninsula will bring massive peace and prosperity to the peninsula and to the region” said Mike Pompeo, former U.S. Secretary of State and CIA Director. “Religious freedom is indeed the foundation of all freedoms… with prayer, faith, and commitment to the Lord, peace will follow.”

Ten governors of South Korean provinces, where Think Tank 2022 will be presented in five regions, congratulated Dr. Moon, who hosted the rally. Many speakers, including former Republic of Korea Prime Minister Chung Sye-Kyun and Cambodian Prime Minister Hun Sen, praised the timeliness of Think Tank 2022 where “international cooperation and solidarity is needed now more than ever,” said Chung.

From Africa, Zanzibar President Dr. Hussein Ali Mwinyi recalled that Africans took part in the Korean War and long for peace and democracy in that region. The peaceful reunification of Korea will lead to “explosive growth,” said renowned American businessman and investor Mr. Jim Rogers. “If trains run through the DMZ and cars run on highways, there will be endless economic development opportunities… benefiting not only the two Koreas, but also China, Russia, Japan and Asia and the whole world.”

Mr. David Beasely, executive director of the United Nations World Food Programme, the world’s largest humanitarian organization and 2020 recipient of the Nobel Peace Prize, said, “This rally is reaching across continents, uniting people all over the world in a spirit of peace, mutual prosperity and public service.” Governments have failed because they couldn’t go beyond “their bureaucracies, their biases, and their fears,” said Newt Gingrich, former U.S. Speaker of the House of Representatives. Think Tank 2022 offers a new way for people from multiple nations to work together “outside the traditional, formal structures” he said.

“Times of crisis often tend to be the moments of greatest opportunity,” said Mark Esper, former U.S. Secretary of Defense. “As in the past, so too in the future; a strong and ready military, one embedded in a network of alliance and partnerships will be critical in this new era of great power competition that is now upon us. This was the Reagan doctrine of peace through strength.”

Dr. Moon and world leaders from all continents signed a resolution formally establishing Think Tank 2022. The 6th Rally of Hope, part of a digital series started by Dr. Moon in August 2020, has brought together tens of millions of people worldwide who embrace freedom, peace, and unity based on the shared ideals of interdependence, mutual prosperity, and universal values. The Washington Times article on the rally is available here