Akan Datang! Disney+ Hotstar To Launch In Malaysia This 1 June 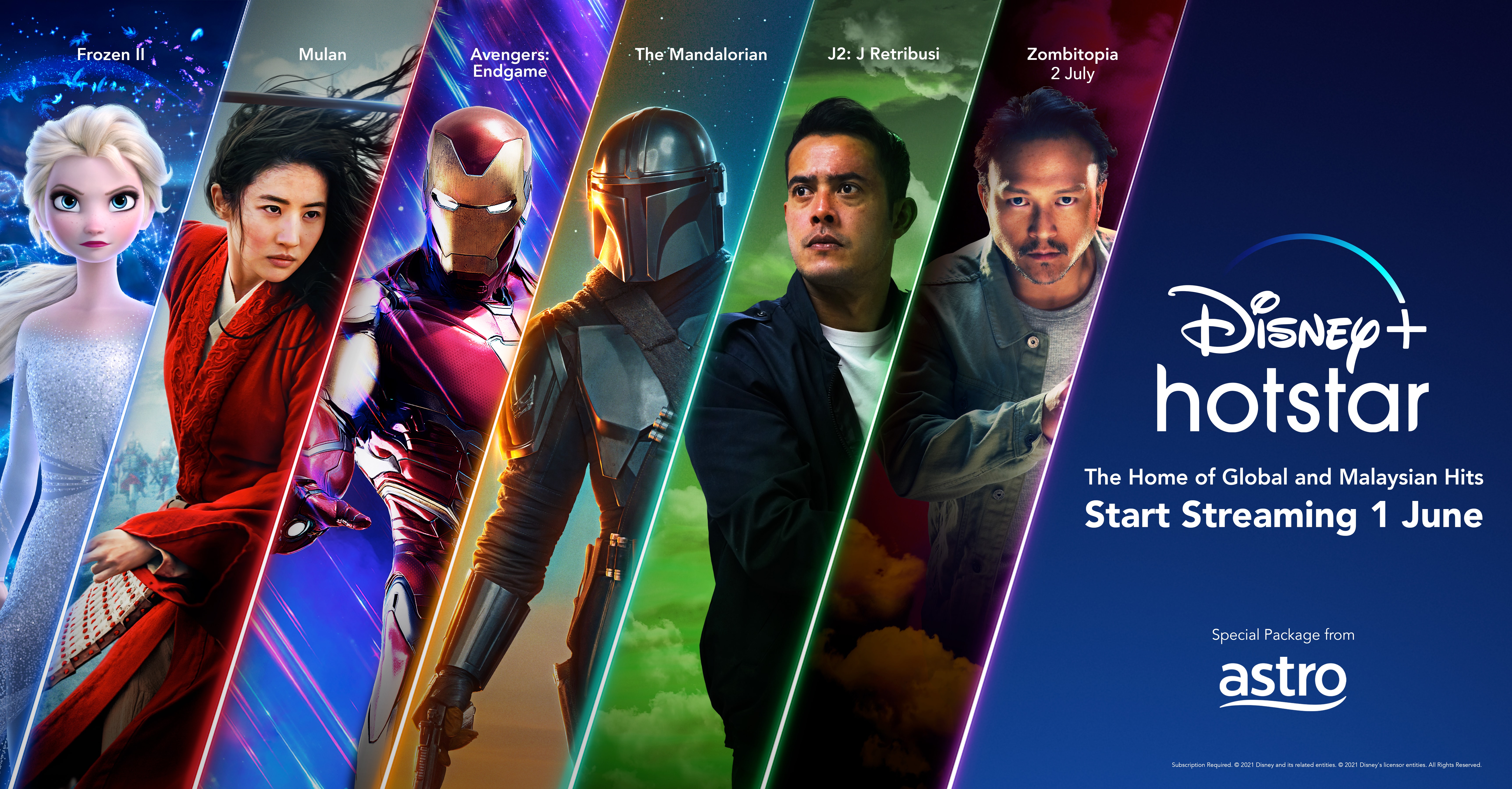 Akan Datang! Disney+ Hotstar To Launch In Malaysia This 1 June

Consumers can subscribe directly to Disney+ Hotstar for RM54.90 for three months

Highly anticipated streaming service will feature over 800 films and 18,000 episodes, including Marvel blockbusters and series, Disney favourites, Disney+ Originals, and top local and Asian movies and drama series. Consumers can subscribe directly for RM54.90 for three months, or through special packages available with Astro

The Walt Disney Company announced recently that the highly anticipated streaming service, Disney+ Hotstar, will launch in Malaysia on 1 June 2021. Viewers will now have a new way of experiencing the well-loved content from the company’s most iconic entertainment brands, including Disney, Pixar, Marvel, Star Wars, National Geographic as well as a wide array of general entertainment series and films for young adult audiences, and homegrown and Asian hits — all in one place.

Consumers can subscribe directly to Disney+ Hotstar for RM54.90 for three months, or through special packages with Astro, for access to an extensive collection of content.

Subscribers will enjoy Disney+ Originals, such as The Mandalorian and High School Musical: The Musical: The Series, and Marvel Studios’ WandaVision, The Falcon and The Winter Soldier and Loki. This is in addition to the latest blockbuster releases and library content, including Marvel Studios’ Avengers: Endgame, Avengers: Infinity War, and Black Panther; Disney’s live action adaptations – Mulan, Maleficent: Mistress of Evil, The Lion King, Aladdin and Beauty and the Beast; Animation favourites – Disney’s Frozen 1 and 2, Moana and Big Hero 6, as well as Disney and Pixar’s Soul, Coco, The Incredibles 2 and Finding Dory. There will also be a robust catalogue of general entertainment series and films such as Nomadland, The Walking Dead, Jojo Rabbit, Criminal Minds, Fresh off the Boat, The Simpsons, Grey’s Anatomy, 9-1-1 and many more.

These multi-year agreements mean that Disney+ Hotstar will be the exclusive home to some of Malaysia’s most anticipated blockbusters, which will skip theatres and launch straight on the streaming service, such as J2: J Retribusi, the explosive action-packed sequel to the blockbuster J Revolusi,starring Zul Ariffin, Ashraf Sinclair and Amelia Henderson, Zombitopia starring Shaheizy Sam, Bront Palarae and Sharifah Amani, and Ada Hantu starring Hairul Azreen. Ejen Ali The Movie 2 will also stream exclusively on Disney+ Hotstar after its theatrical debut.

In addition, top-rated local Primetime drama series such as TV3’s Single Terlalu Lama and Kekasih Hati Mr. Bodyguard will premiere first at 7am on the same day as the linear telecast, only on Disney+ Hotstar. With this, drama aficionados can watch their favourite local series on the platform up to 15 hours before anywhere else.

For viewers who love watching everything in one go, there are star-studded series like Wifi Sebelah Rumah (featuring Zul Ariffin and Ruhainies) and Semanis Senyumanmu (featuring Daiyan Trisha and Aiman Hakim Ridza).

Kids and families will enjoy the likes of hit series such as Ejen Ali, over 10 seasons of Upin & Ipin, Club Mickey Mouse, T.O.T.S, Alif & Sofia, Wizards of Warna Walk and Marvel’s Spider-Man, while fans of Asian content can look forward to popular movies and series from across the region, such as Infernal Affairs, Ip Man 4 The Finale, The Deer and the Cauldron, The Legend of Haolan, Pandian Stores and Vishwaroopam 2, and exclusive content like The Silent Forest, Dil Bechara and Live Telecast.

David Shin, General Manager, The Walt Disney Company Taiwan, Hong Kong and Southeast Asia said, “Launching Disney+ Hotstar in Malaysia, in collaboration with Astro, is an important milestone for us as we continue expanding our footprint in Southeast Asia to bring our compelling entertainment offering to consumers in the region. Malaysians are not only connected, but also extremely tech-savvy and they represent some of Disney’s biggest fans in the region. We are tremendously excited to be able to deliver a wide array of content for everyone of all ages through our world-class platform, covering the best from Disney’s brands across a multitude of genres.”

Ahmad Izham Omar, Executive Director of Content & Creative, Disney+ Hotstar, Southeast Asia said, “In addition to being able to bring amazing content from Disney’s incredible brands from all around the world, it has been such a privilege to collaborate with homegrown studios and creators to bring Malaysian stories to Disney+ Hotstar and drive the growth of our creative community. Through Disney+ Hotstar, we look forward to continuing our deep-rooted support of Malaysian-made content and shining a well-deserved spotlight on inspiring Malaysian stories, filmmakers and talent.”

Henry Tan, Group Chief Executive Officer of Astro, said, “We are delighted to aggregate the best of the best to be the undisputed entertainment destination for Malaysians. Our customers deserve great entertainment and the addition of Disney+ Hotstar with our much-loved hits, local signatures and unparalleled sports would delight them. Disney+ Hotstar will be available to our customers from 1 June and we are working towards making Disney+ Hotstar available via our Ultra and Ulti connected boxes later this year.”

Subscribers will be able to stream Disney+ Hotstar on a wide selection of compatible mobile and connected TV devices at launch, including streaming media players. Each registered account can support two concurrent streams, and the majority of content is available for download on mobile and tablet. All content is commercial-free, with a dedicated kids section with age-appropriate content and a kid-friendly, easy-to-navigate user interface.

Endless Entertainment for Malaysians of All Ages

From 1 June onwards, subscribers in Malaysia can enjoy:

Including Original Animation and Live Action Remakes such as The Lion King, Mulan, Aladdin, Beauty and the Beast, Dumbo, Frozen 1 and 2 and the Pirates of the Caribbean series

Exclusive titles only available on Disney+ Hotstar, such as The Mandalorian, The Mighty Ducks: Game Changers, folklore: the long pond studio sessions, The Right Stuff, High School Musical: The Musical: The Series, Big Shot, Flora & Ulysses, The One and Only Ivan, Muppets Now, Lady and the Tramp and Godmothered

Upcoming movie Disney & Pixar’s Luca will be released straight to Disney+ Hotstar on 18 June. Heartwarming and award-winning films like Soul, Toy Story 4, Coco, The Incredibles 2, Finding Dory, shorts such as 22 vs. Earth, Burrow, Bao and Pixar Popcorn as well as Inside Pixar, an inside look into the people, artistry and culture of Pixar Animation Studios

Explore the world with Secret of the Whales, Own the Room, Gordon Ramsay: Uncharted, Free Solo, The Right Stuff, The World According to Jeff Goldblum, Genius and Wicked Tuna

This includes the likes of hit series such as Ejen Ali, Alif & Sofia (starts streaming mid-July), Wizards of Warna Walk, Mickey and the Roadster Racers, over 10 seasons of Upin & Ipin for kids and families, and so much more

The Silent Forest, Ip Man 4: The Finale, Agent Mr. Chan, Infernal Affairs, Line Walker 2, The Storm Riders, Number 1 (starts streaming mid-June), The Deer and the Cauldron, The Legend of Hao Lan, Nothing Gold Can Stay and Ruyi’s Royal Love in the Palace