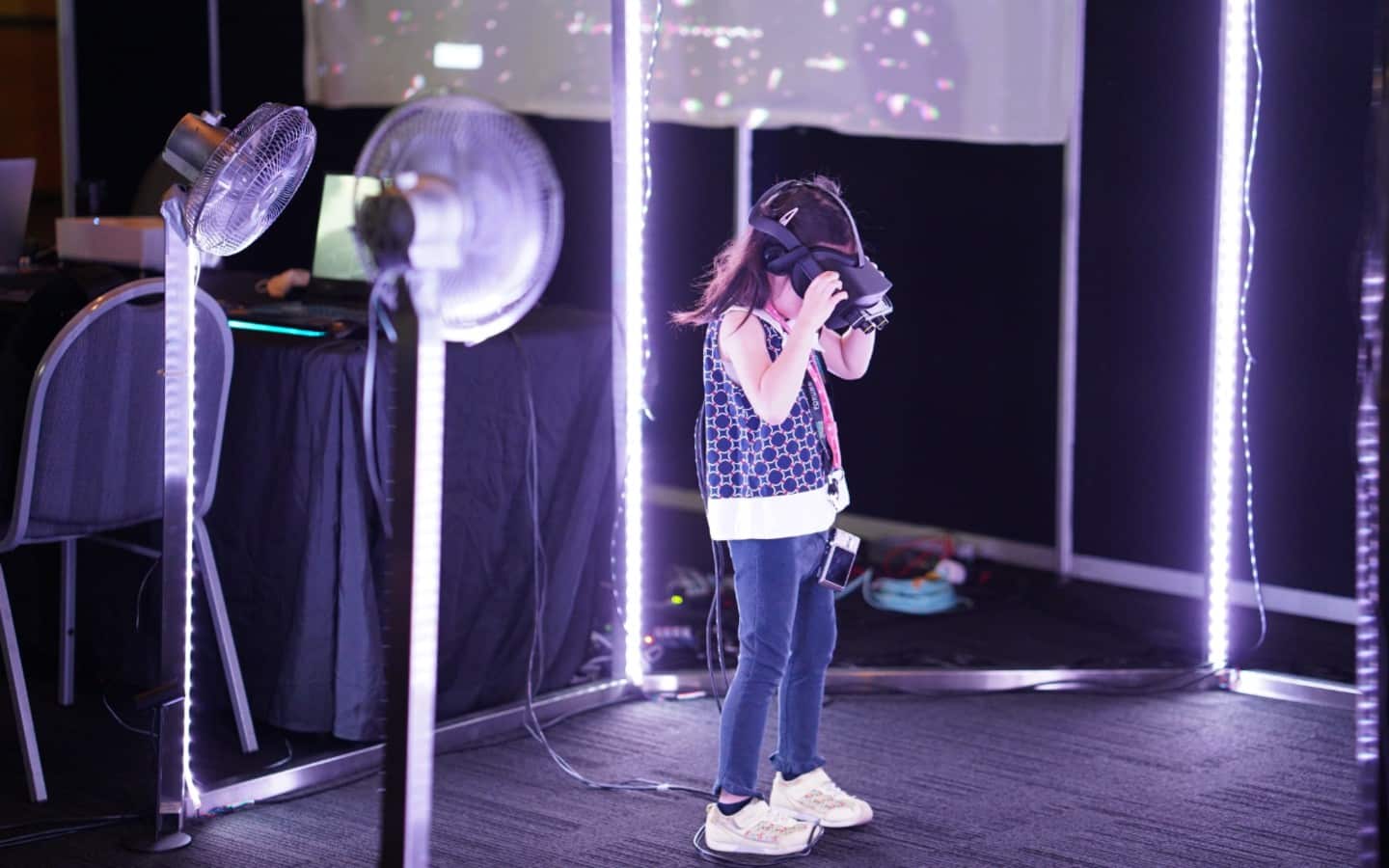 This conference is trying to bring people from across the globe to innovate and create amazing technologies – with diversity, we can hear different perspectives and magnify creativity and innovation

This year’s edition of SIGGRAPH Asia, themed ‘Dream Zone’, featured eminent industry figureheads who are at the cutting-edge of the CGI, FX and Animation industries. They inspired continuing dialogue about the industry’s challenges and responsibilities, for matters such as cybersecurity for virtual worlds and characters, the impact of deep fakes and facial recognition, accurate and science-based data visualisation, as well as the applications of visualisation to, for example, autonomous driving vehicles.

Simon McIntyre, Associate Dean Education for UNSW | Art & Design, said, “It’s been amazing to meet people who are not only developing technologies, but also realising that the industry is moving into unchartered territories, and that they are now looking for something beyond the ability to alter environmental artifacts. Asking, how do we start to change industry with it? How do I become someone who can shape this in the future or be a leader in this space?”

“It is great that there’s that many talented people here looking beyond the now into the horizon, of what’s coming? So, for us, that’s validating because it matches what we’re trying to do with their education provision. We’ve met so many people here who are way ahead of the majority of other people out there in this space,” he added.

The discourse also applied not only to the future of work in the industry, but that of movie making.

The Featured Sessions Programme’s Chair, Mark Elendt, said that “Being in the Dream Zone, I was able to put together my dream panel, which featured the world’s largest studio creative heads, including Animal Logic, Pixar, Framestore, Industrial Light & Magic and Weta Digital. What was extraordinary is that, after listening to them discuss their pipelines, I had more questions than answers. It was thought-provoking and created a lot of discussions afterward, way past the actual session, which takes us forward into the future and that’s what’s fantastic about SIGGRAPH Asia.”

The breadth and diversity across the programme content reflected the interdisciplinary nature of the SIGGRAPH Asia community. Andrea Sosa Pintos, a Researcher for CSIRO Industrial Physics and a speaker on the diversity and inclusion panel said, “This conference is trying to bring people from across the globe to innovate and create amazing technologies. By bringing diversity and being able to hear different perspectives, we magnify creativity and innovation, so that we can create together. So, I think it’s important that we discuss these topics and that we are connected with one another and so that we can expand our perspectives learning from each other.

Doctoral Consortium Programme Chair Alyn Rockwood, Chief Scientist for Boulder Graphics remarked, “If one of the main reasons to come to a conference is networking, then Brisbane’s been really successful. I’ve talked to a lot of people. The area is very pleasant and conducive for networking. You can just take a walk and talk. Sometimes, you underestimate the convenience and the comfort of good restaurants and nice place to be, and how that influences networking.

The SIGGRAPH Asia Exhibition is known for its array of emerging technologies. Chris Sutton, CEO of Tracklab, said, “We are an Australian company. It’s been great to have the opportunity to come to a show based in Australia and it’s been awesome to meet lots of really interesting existing and potential clients doing cool projects. We’ve had a great time showing off performance capture using the latest motion capture technologies.”.

A Brisbanite, Brett Leavy of Unity Technologies, Gold Sponsor of SIGGRAPH Asia 2019, said that it was insightful to see the international technology companies exhibit here in Australia. “We’ve been working in our lab for a while and not always getting out. And sometimes you’ve got to get out to have a look around. It’s been wonderful – it’s good to see what other people are doing and to know that we are still competitive.”

Held for the first time at SIGGRAPH Asia this year was the Business & Innovation Symposium (BIS), which attracted so many that there was standing room only for some of the sessions. SIGGRAPH communities have been supportive of innovation in modern Hollywood and Silicon Valley for the last 40 years. The Asia-Pacific region’s population of 4.4 billion people will create giant market possibilities and the aim of BIS is to play a lead role in the region’s innovation.

The BIS Programme Chair, Michael Hsin-Yao Liang of Silkroad Visual Technologies, said, “I’m delighted that the SIGGRAPH Asia community is extending its footprint to include the business side of the industry. It’s a very important part of the industry and it is potentially huge in Asia. We addressed the opportunities that will come with the introduction of 5G, in terms of how vastly improved speed, connectivity and bandwidth will promote the everyday use of Virtual Reality and Augmented Reality; of how we can grow the 3D ecosystem, tackling skills and talent development; and the rise of “Virtual Beings” and how they can be monetised. The symposium was very well received and we hope to continue it in future editions of SIGGRAPH Asia.”

Another programme new to SIGGRAPH Asia, and one very close to the heart of the Conference Chair, Tomasz Bednarz, Demoscene, fascinated a lot of visitors. One of the Demosceners’, Greg Newton (Ziggy/Defame), commented that, “SIGGRAPH Asia has completely exceeded my expectations.” He felt the reception for the Demoscene presentations and talks had been excellent, “Because with the live show, for example, the live shader coding, people are actually interested in how graphically, in a coders point of view, does that come together? So, we’ve really just broken all the elements down and people have been so attracted to it, to understand how it works.”

Of the event that he worked two and a half years to pull off, Bednarz said, “I am extremely proud of SIGGRAPH Asia 2019 being held in Australia for the very first time. The whole team worked hard to put together a fantastic programme that inspired thousands. Brisbane itself provided a super-friendly atmosphere for all attendees. See you next year in Daegu!”

Honourable mentions for ‘Best Demo Voted by Committee’ were given to: Enhancing Suspension Activities in Virtual Reality with Body-Scale Kinesthetic Force Feedbacks; Brobdingnagian Glass: A Micro-Stereoscopic Telexistence System; and SwarmCloak: Landing of a Swarm of Nano-Quadrotors on Human Arms.

The runners up for the ‘Best Demo Voted by Attendees’ were Hanger Drive: Driver Manipulation System for Self-balancing Transporter Using the Hanger Reflex Haptic Illusion and Licker: A Tongue Robot for Representing Realistic Tongue Motions.

An Extended Reality (XR) programme showcased emerging media and cutting-edge technologies in XR such as Virtual, Augmented and Mixed Reality. Awards were delivered in association with the XR programme and these included:

The ‘Best XR Technology Voted by Attendees’ – Winner was by Upload Not Complete and the runner’s up were HyperDrum: Interactive Synchronous Drumming in Virtual Reality using Everyday Objects and Beyond the screen-Volumetric Displays from Voxon Photonics.

The AirSticks: An Instrument for Audio-Visual Performance Through Gesture in Augmented Reality emerged as the winner of the Real-Time Live! programme. The AirSticks combine the physicality of drumming with the unlimited possibilities of computer music, taking the practice of real-time electronic music to a new realm. The team included Alon Ilsar (SensiLab, Monash University) and Matthew Hughes (University of Technology Sydney, Technische Universität Berlin).

SIGGRAPH Asia 2020 returns 17 – 20 November 2020 in Daegu, South Korea. The theme is Driving Diversity and the event will be the 13th ACM SIGGRAPH Conference and Exhibition on Computer Graphics and Interactive Techniques in Asia. Visit https://sa2020.siggraph.org/ to stay abreast of the programme. SIGGRAPH Asia 2020’s Conference Chair is Jinny HyeJin Choo, Guest Professor and researcher at the Korea National University of Arts (K’ARTS) in South Korea.

Photoshop Reimagined For iPad: What’s Next